Encore trio is a voice, clarinet and piano trio formed by Ariel Lee (voice), Xiya Cheng (clarinet) and Lisa Angelia Tanto (piano). The three are all students from HKU Utrechts Conservatorium. Encore trio has been performing in various locations and concerts in Utrecht and nearby cities since 2020. The trio was coached by established musicians in the conservatory.

Ariel Sin Yu Lee is a Hong Kong mezzo-soprano and flutist. She was awarded the Holland Scholarship in 2017 and obtained her master's degree in voice at the HKU Utrecht Conservatory in 2019. She completed her bachelor's degree in music at the Chinese University of Hong Kong in 2012, on flute and singing, with an entrance scholarship by the university. In 2017, she performed as one of the singing soloists in Cantabile Limited's producCon of Handel's Messiah in Hong Kong. In the same year, she made her opera debut with the Hong Kong Philharmonic in Purcell's “Dido and Aeneas”, singing the roles of second woman and second witch. In 2018, Ariel entered the last round of Storioni Willem Twee Chamber Music Competition in 's Hertogenbosch. In 2019, Ariel performed as the soloist of the talent opera “To Plant Again” in the Opera Forward Festival organized by the Dutch NaConal Opera. In September 2020 and June 2021, she performs as a soloist in the Opera Viva Festival in Woerden.  Ariel is a member of the traineeship programme of Nederlands Kamerkoor (NKK NXT) in the 2020-2021 edition.

Lisa Angelia Tanto is a 20 y.o pianist from Indonesia . She is currently studying under Klára Würtz in HKU Utrecht Conservatorium, with the pursuit of becoming a professional pianist. She has played in several masterclasses with professional pianists in Indonesia and also in The Netherlands, some were with Wolfgang Schmi_-Leonardi, Alexander Ullman, Pascal Rogé, Nazareno Feruggio, and Hans Eijsackers. Lisa has played in the mini Liszt Festival in Fentener van Vlissingenzaal, HKU Utrecht Conservatorium. She had won some prizes in piano competitions in Indonesia including the Yamaha piano competition and LCM piano competition, and also a prize in Tianjin International piano competition, China.

Xiya Cheng is a clarinet player and a reed maker specializing in clarinet and saxophone. When she was 15 years old she won the 1st prize of an instrument city compeCCon in Jiangxi, China. From 2012 to 2016 she has performed chamber music in Köln in collaboraCon with Prof. Willfried Roth-Schmidt. During that period, she took part in a masterclass with Prof. Johannes Peitz in Hannover and Prof. Marco Thomas in Mannheim. In 2016 she started her first Master degree with NDR clarinet soloist Gaspare Buonomano in Hamburg Konservatorium. In 2017 she moved to Utrecht to start her second Master degree at Utrechts Conservatorium with Prof. Harrie Troquet. Since then, she has been specializing in the art of reeds' producCon, guided by Gaspare Buonomano. In 2019 she held mulCple workshops to help clarinet and saxophone players adjust their reeds. In the same year, she launched her handmade reed brand Chengreed.com. In 2020 - the year of her double graduaCon in Hamburg and Utrecht - she founded Encore Trio with Ariel Lee and Lisa Angelia Tanto to bring the joy of classic and jazz music to a wider audience. 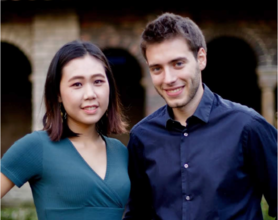